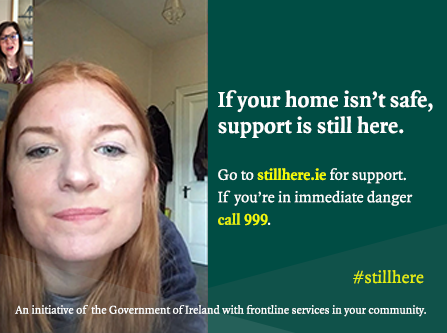 To alleviate the impacts of COVID-19 policies, many initiatives have been developed by civil society organisations – NGOs, local governments, or citizens. A team of national researchers from the RESISTIRÉ project has collected and highlighted a set of particularly relevant initiatives in 27 European countries and in Iceland, Serbia, the United Kingdom and Turkey. The initiatives currently cover eight specific domains: gender-based violence, the labour market, the economy, gender-pay and pension gaps, gender care gaps, decision-making and politics, environmental justice, human and fundamental rights.

In Ireland, the Still Here campaign brought together the Department of Justice, NGOs, and private actors to inform victims of domestic violence of the support available during the Covid crisis

Limiting social interactions and restricting freedom of movement have been key policies to counter the spread of COVID-19; while European states started imposing lockdown measures, several NGOs and associations warned about the increasing risk for victims of domestic abuse. In Ireland, the Still Here campaign aimed at reassuring victims that the support system was still available to them.

A massive TV, Radio, and Social Media Campaign tackling the issue of domestic violence in the context of COVID-19

The campaign was portrayed as an adaptation of domestic and sexual violence support services from State agencies and the voluntary sector in the context of Covid-19, resulting in an increase of support services available. The campaign website highlights that restrictions of movement do not apply to a person escaping from risk or harm or seeking to access essential services; it also guarantees that these services remain open “at each of the different stages of restrictions which are now in place due to Covid-19, even the most severe”.

Thus, the campaign represents a good example of a collective initiative involving government actors, NGO actors, and private sector actors. To this end, the Department of Justice provided an additional allocation of over €160,000 to community and voluntary groups to support their work as well as funding the making and airing of the ad by private organsiations.

A campaign targeted to all victims of domestic abuse, female and male

The target groups of the awareness campaign are both women and men who are victims of domestic violence. Of the two radio and TV adverts that were aired, one portrays a man who is a victim of domestic abuse, and the other a woman.  All adverts provide at the end the telephone numbers of different organisations providing support services, emergency numbers as well as the website address of campaign where more information can be obtained.

Read more on the NGOs’ websites: