The fourth Open Studio of the second cycle was held on 6 and 7 April 2022 and was titled ‘Better is Possible: Gender-based Digital Violence and Digital Activism’. It brought together participants from the RESISTIRÉ consortium itself as well as experts, activists, and creative people from outside of the project.

Gender-based digital violence (cyberbullying, hate speech, stalking, hacking digital profiles and/or physical appliances, …) recreates and increases pre-existing intersections of inequalities. Victims from vulnerable groups, therefore, are more likely to face online violence. Furthermore, online violence is used as an instrument to deter women and people from the LGBTQI+ community from taking up power within their work or activism (activists, politicians, journalists, academics, …). As such, the most harmed groups include (but are not limited to): women of colour, women from ethnic minority groups, young girls and women, people from the LGBTQI+ community, women and LGBTQI+ journalists, politicians and activists.
The consequences include serious negative mental health impacts, economic impacts, impacts on personal relationships, as well as a loss of public participation and disempowerment.

The main questions that this OS tried to answer include the following:

To further inspire participants and evoke empathy, six personas were put forward to the group for them to think about the factors that could have made a difference in the lives of the people described. 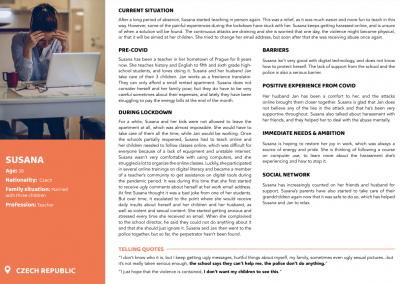 Six inspiring policies and societal initiatives provided a discussion base for the Open Studio participants.

Input from the Open Studios will feed the development of concrete solutions:

The operational recommendations produced in Cycle 2 will be available in July 2022. Register here to stay informed!

Back to all open studios